The Decline of Computer Science: Two Decades of Trends Reshape the Industry 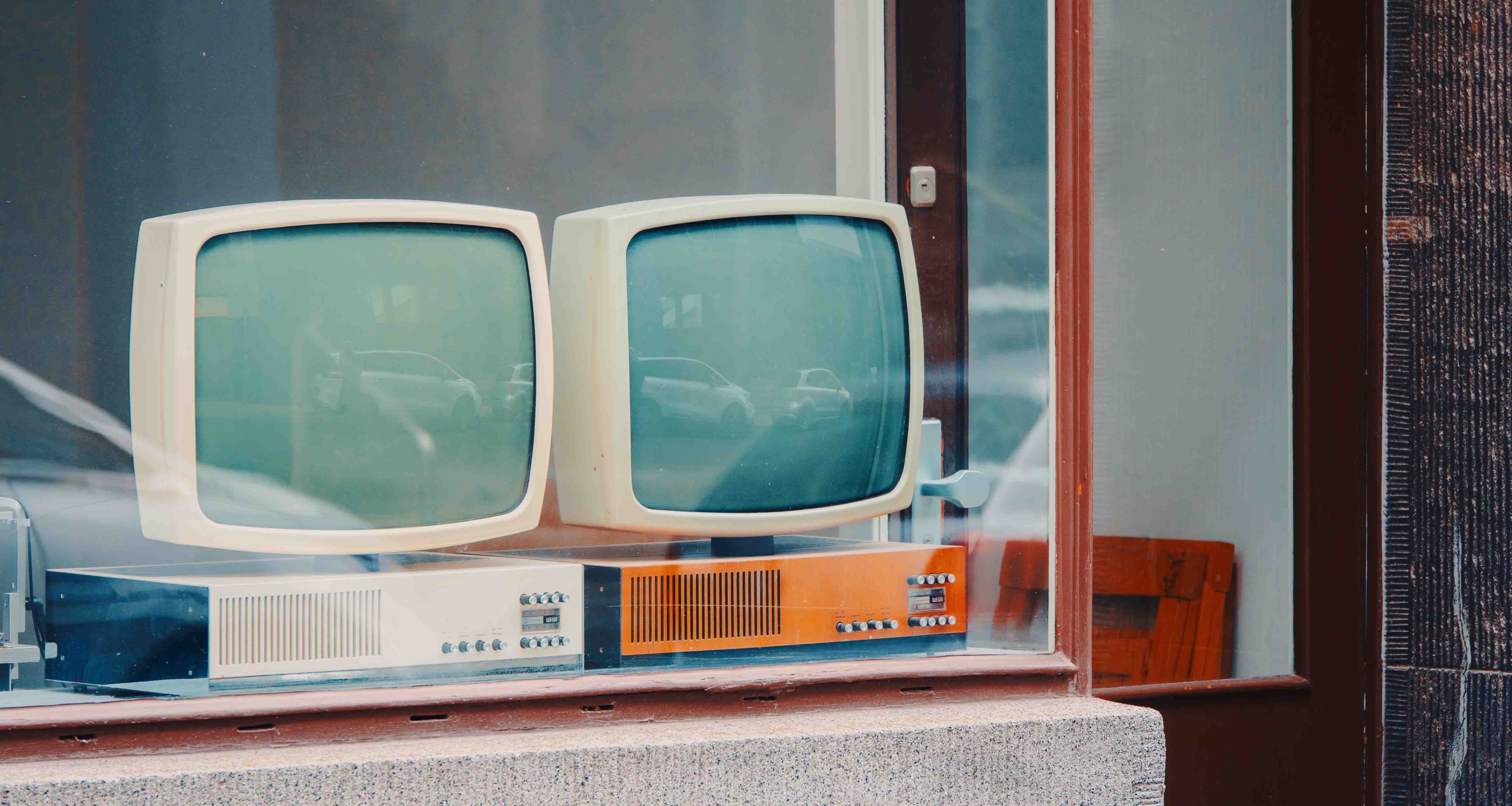 Every day, roughly 500 million of Google's 3.5 billion searches have never been searched before. Every month, nearly 2.45 billion humans login to Facebook. And every year, 130 million people are born into the Information Age — and playing Candy Crush, the free app that earns over $900 million a year.

So in an unquenchably digital world, how do we explain the loss of Computer Science graduates?

According to the National Center for Education Statistics (NCES), Computer and Information Sciences degrees in the U.S. declined 20.74 percent between 2003 and 2018, even though this degree earned the fifth most popular for all 2018 grads:

The unexpected decline seems at odds with everything we read, hear and experience ourselves. Take this stat: The U.S. Bureau of Labor Statistics projects employment of computer and information technology occupations to grow 12 percent between 2018 and 2028, much faster than average. Entry-level education for these jobs requires at least a bachelor's degree. The skills gap is growing, and we're already behind.

2018's most popular degrees (seen above) are sorted below by growth rate. Four out of the ten report negative trends as a percent change since 2003. Notice Computer and Information Sciences is followed only by Education for the lowest rank in this dataset. So what happened in the last 20 years to pop a promising field?

The dot-com crash of 2000 marks the start of the recession for the tech industry. Companies folded, trillions were lost and growth came to a screeching halt.

In 2003, Computer and Information Sciences represents 5.12 percent of all degrees. By 2007, enrollment trends dip into their lowest points and don't recover until 2010 — after the Great Recession.

Fast-forward to 2018, and the trend of graduates with degrees in Computer Science shifts upward to 4.06 percent, close to pre-recession levels, but still 21 percent lower than in 2003. 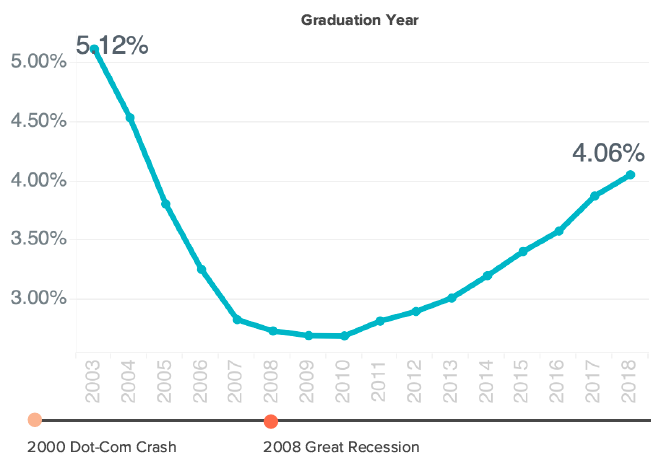 By isolating the number of graduates with Computer and Information Sciences degrees by year, a massive decline is evident by the chart on the left, followed by a decade of consistent growth. Post-recession trends on the right show a positive net change of 50.42 percent when an additional 100,000 new Computer Science graduates enter the workforce.

This translates into a new generation of graduates with new skills, in new industries, coming from universities with new programs that drastically shift talent in the workforce.

Who are these new graduates?

To answer this question it's necessary to understand the growth and decline for specific majors and disciplines within Computer and Information Sciences. The clear winners in terms of highest growth are Data Science and Analytics and Cybersecurity.

Graduates with degrees in Data Science and Analytics have seen explosive growth since 2010 with a 3,000 percent change in the field. Cybersecurity sits at an impressive 662 percent rate of growth.

Where do these new grads live and work?

Established tech hubs still reign. New research from Jed Kolko at the Indeed Hiring Lab underscores the dominance of leading tech sectors using construction in Seattle, traffic in Austin and job postings in the Bay Area to illustrate signs of expansion where deep tech roots already exist — despite how expensive they are.

The geography below drives home Kolko's results. Our data revealed a third of Data Science and Analytics alumni congregate in California, New York and Texas. Notice both the variation and overlap with Cybersecurity grads living in D.C., Maryland, California and Texas.

Emerging hubs have their advantages, though, and the next Silicon Valley isn't far behind the leading metros. Affordability, lower levels of competition and greater geographic diversity attract job seekers outside the leading hubs. For instance, the Research Triangle defined by Raleigh, Durham and Chapel Hill in North Carolina is making waves in tech by producing ground-breaking products and people. It tops our list as the seventh most popular state for Data Science and Analytics degrees and tenth for Cybersecurity.

What schools are they coming from?

The University of Maryland Global Campus is one of six Maryland universities to report an increase in enrollment between 2013 and 2018 — 15 Maryland universities reported a loss. This growth along with a large student population of active-duty military servicemembers or veterans interested in defense make UMGC a top producer of Cybersecurity degrees.

Not to mention, UMGC is headquartered at the epicenter of the industry between the DoD's Cyber Command in Maryland and the Cyber Corridor in Virginia. Johns Hopkins came in second for growth in Maryland.

Top 5 Producers of Data Science and Analytics and Cybersecurity Degrees

Deloitte, Amazon and Booz Allen Hamilton are the top three employers of Data Scientists, Analysts and Cybersecurity Specialists. Trending industries for these two fields include IT, Finance, Software, Healthcare and Defense.

Unlike more general areas of study, these graduates land jobs highly correlated to their degree with higher than average salaries. We dove into this dataset to learn more. Take a look: 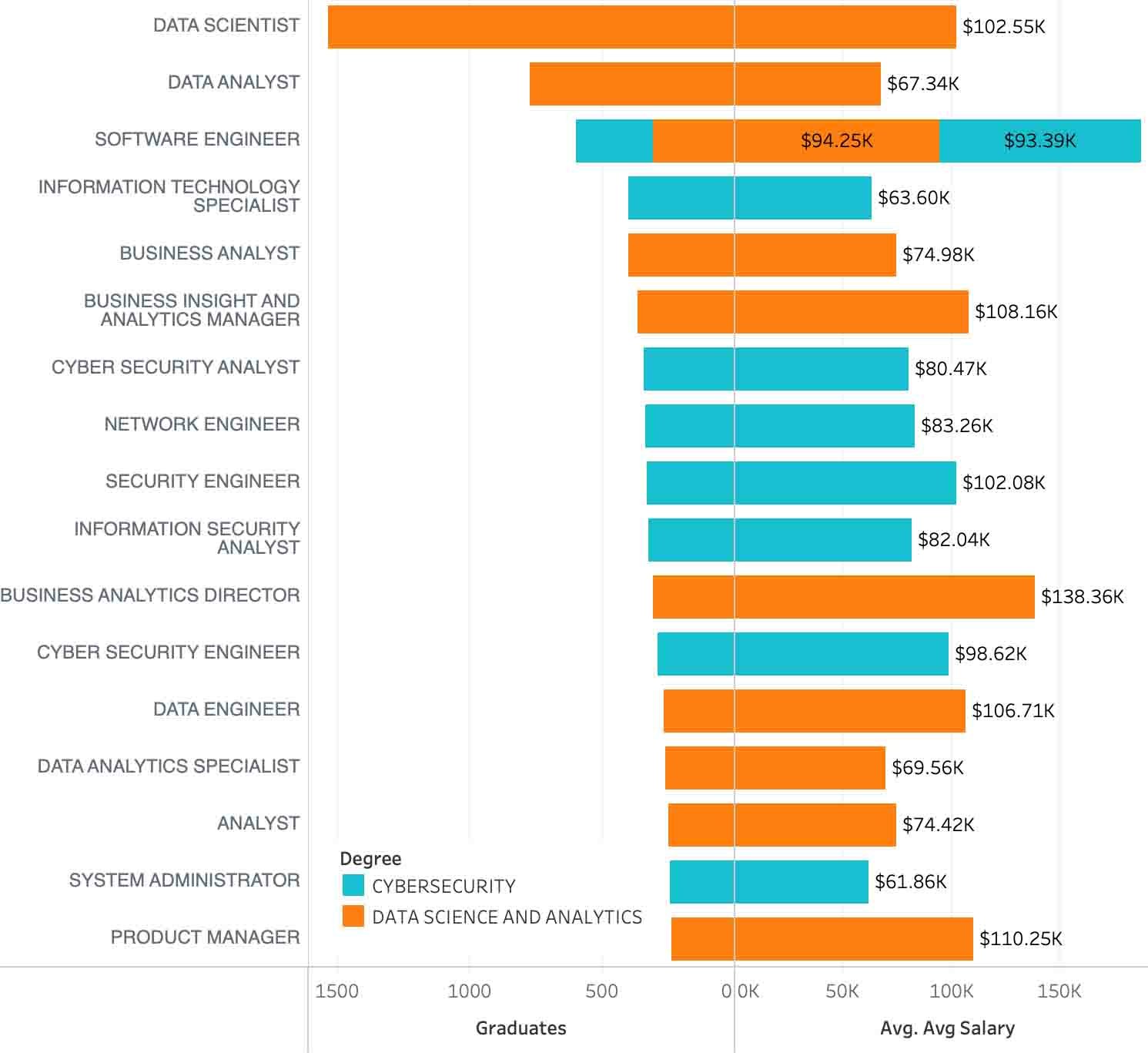 Which Computer Science skills do top employers care about?

In our data we found 1,909 distinct skills for graduates of Data Science and Analytics and Cybersecurity (including soft, technical and interpersonal).

When looking at all skills that rank with positive relevance we can identify the need-to-have versus the nice-to-have skills that get these grads the job. High scoring relevancy allows us to identify the key skills needed to land jobs at top employers based on specific occupations, industries and cross-skill relationships.

In this chart, skills that display an optimal mix of popularity and relevance are Elasticsearch, Deep Learning, Distributed Computing, RUBY (programming language) and PostgresQL. 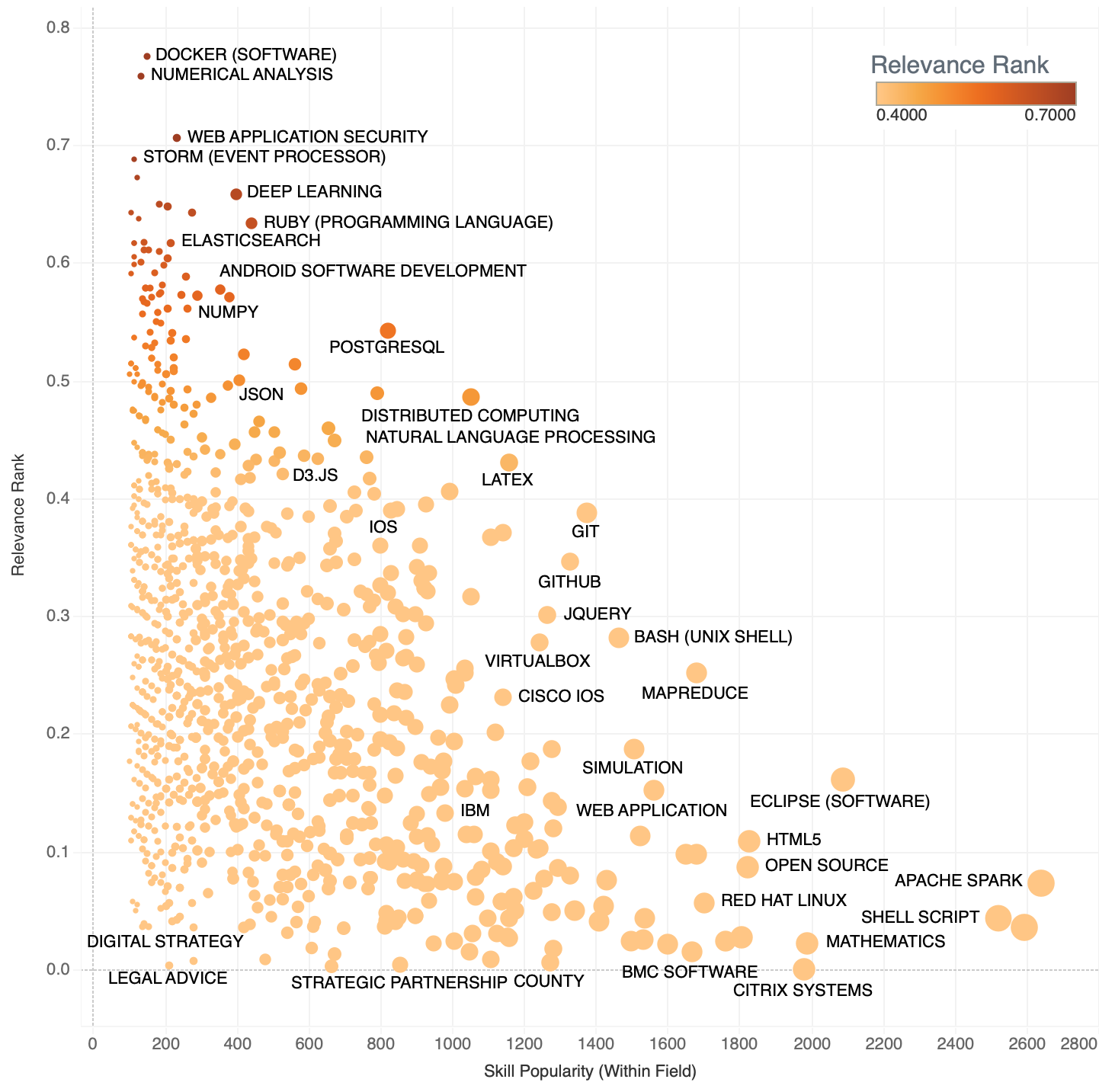 Is the gender gap in Computer Science real?

This chart couldn't make the gender gap in Computer Science any more clear. 70 percent of graduates earning degrees in Data Science and Analytics and Cybersecurity are male, while only 30% are female. Pair this with the skills gap and we have a lot of work to do. Organizations like Accenture and Girls Who Code have joined the movement to help funnel the pipeline through clubs, camps, programs and partnerships. Read their story here. 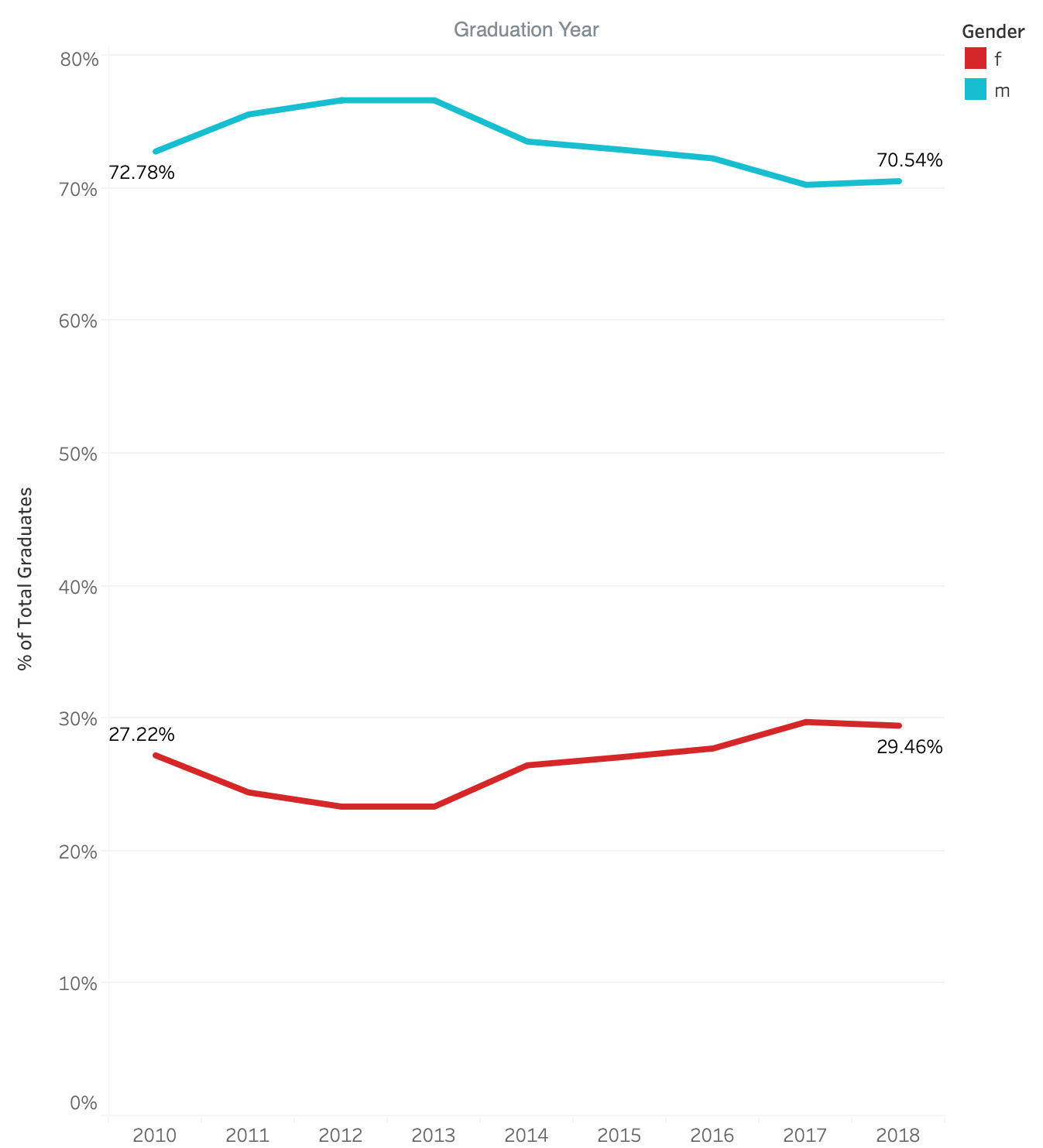 How does your institution contribute to the Computer Science industry?

Steppingblocks is a data and analytics engine that provides workforce and education outcome insights on over 100 million people in the U.S. Together, we can create a confident ecosystem of students, institutions and employers by understanding our impact at scale. To get a snapshot of lifetime outcomes for your institution, let's talk.

Data is everywhere. The difference is how we use it.