Pay equity is a critical issue in the workforce and for Higher Education. Steppingblocks previously explored the R2 universities producing the highe...

Closing the Skills Gap with Girls Who Code 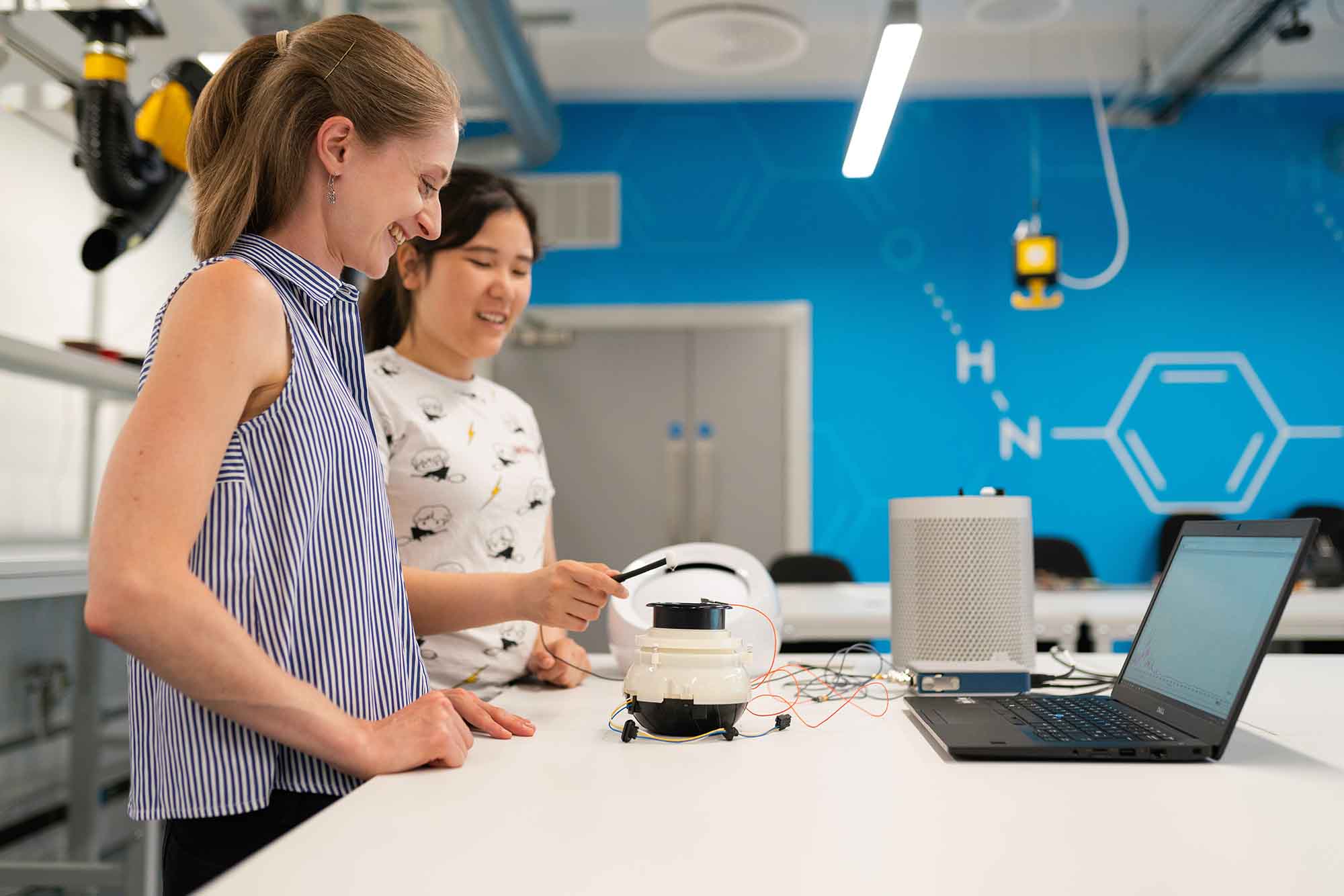 This research by Accenture and the nonprofit group Girls Who Code emphasizes not only the presence of a gender gap, but one that’s getting worse. This shrinking workforce paired with a technology skills gap has negative implications for the future of our economy on a global scale.

Accenture reports that in 2015 there were 500,000 new computing jobs — and less than 40,000 new computer science graduates. The opportunity for women in computing is clear. And Girls Who Code was founded to build the pipeline. 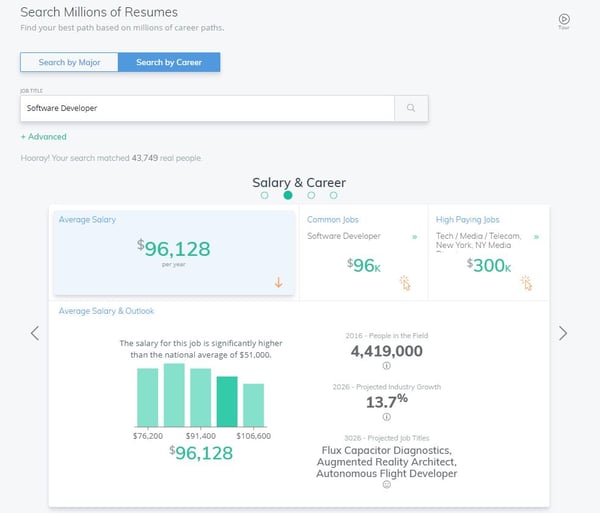 In just six years, 90,000 girls in 50 states have joined the Girls Who Code movement through their Clubs, Campus events and Summer Immersion Programs. Alumni of these programs are declaring computer science and related majors at a rate of 15 times the national average. For black and Latina alumni, the rate is 16 times the national average, crushing the status quo. But it’s not happening through coursework and projects alone. Girls Who Code founder and CEO, Reshma Saujani, is affecting change on a cultural level.

“There's no way all the girls are going to wake up tomorrow and say, ‘I want to learn how to code.’ We must be very intentional about it. We can never take our eyes off gender.”  -Saujani in an interview with EdSurge

In Atlanta, GE Digital is on watch, priding itself in creating disruptive, positive change — and they believe women share the stage to be change-makers. To help funnel the pipeline, they partnered with Girls Who Code last summer to offer rising high school juniors and seniors seven weeks of computer science training with Atlanta’s top tech talent, including workshops, mentorships and panel discussions like the career Q&A held at GE Digital’s Buckhead location.

Steppingblocks had the chance to attend.

What we saw was a generation of engaged students taking proactive steps to make a career out of something they genuinely love doing. They chose to spend seven weeks of their summer interacting with all arms of computer science to secure their spot in a future of cyber security, software development or something they'll invent. What’s most interesting is the intent of their questioning. Themes of “women in tech” and “male allies” weren’t the priority, although the older demographic of panelists tried to steer the conversation this way. 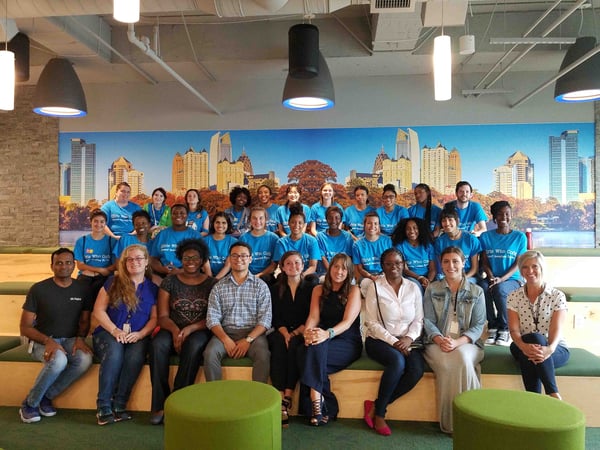 Steppingblocks with Girls Who Code, GE Digital, GoWithMe and Rigor.

They were more interested in the challenges of founding a startup, how to transition to tech jobs abroad and the value of a college degree in CS. The reality is, though, women have historically had a harder time proving themselves in this space, and it was important for the panelists to explain this. We told them to say yes to opportunity, to be comfortable with the uncomfortable and to use their education to solve real and far-reaching problems.

Mallory Riggins, field marketer at Rigor, participated on the panel from the perspective of a recent college graduate, which the girls made an easy connection with. Here's what she had to say: "I was so impressed by this ambitious group of girls and the Girls Who Code Summer Immersion Program. The experience gives them the opportunity to kickstart their career in technology while preparing to do their part in closing the gender gap in our field."

Fewer than 1 in 4 computer scientists are women. So in addition to corporate partnerships, Girls Who Code works with universities to expand their reach to even more girls. PCMag recently visited Harvey Mudd College in Claremont, California to hear student app pitches and talk to program mentor Dr. Aashita Kesarwani from Tulane University. We had the chance to ask Dr. Kesarwani about her experience instructing iPhone App Development, and she said, "It was incredible to see the girls come up with creative ideas, take the initiative to tackle challenges and support each other to build amazing apps." Other schools working to change the perception of what a programmer looks like include Loyola Marymount University, DePaul University and Bryn Mawr School. 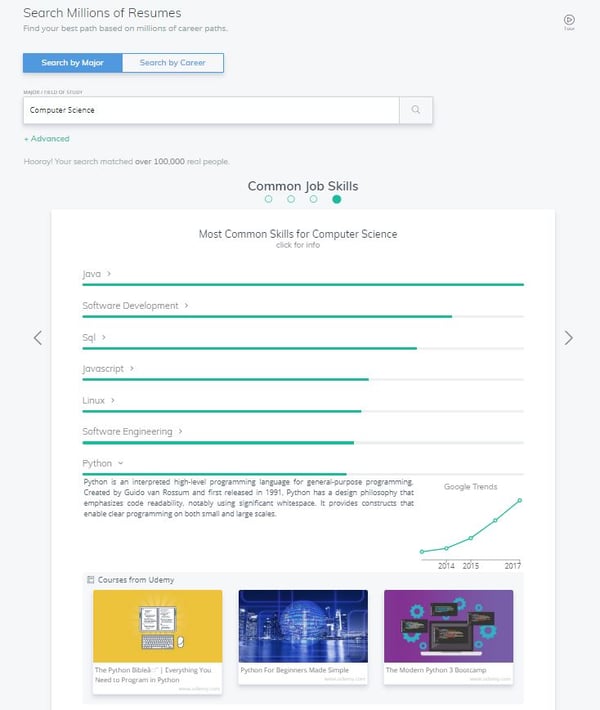 Steppingblocks data reports Python skills are trending up for careers in CS.

The technology skills gap is growing. 92% of employers say the skills gap is having a negative impact on their business when supply can’t meet demand. There’s a huge opportunity for female (and male) students to get on a targeted path to a future in technology. Steppingblocks, in partnership with the National Science Foundation, provides unparalleled access to a dataset of over 60 million professionals to help students and universities act now and get on the right track.

Try our Student Platform free for 14 days or contact us for a Custom Report or Demo.

END_OF_DOCUMENT_TOKEN_TO_BE_REPLACED

More than ever before, flexibility and remote work have allowed recent coll...