The Q&A: Paris Stroud on Students, Startups and the Surprising State of Homeless Youth

Georgia State University student, Paris Stroud, spent her break at the Atlanta Tech Village working in the Steppingblocks marketing department growing the brand and organizing outreach. She lived to tell the tale.

What do you want to be when you grow up?

Oh, the big question! What I’m really interested in doing is being a consultant or working in consultancy. I like the idea of being presented with new problems every day and getting the chance to travel. Honestly though, since this program with Students2Startups and working with Steppingblocks, I feel like in the future I do want to start my own company. I’m not necessarily sure what it would be yet, but I like the startup ecosystem.

How would you describe working for a startup? 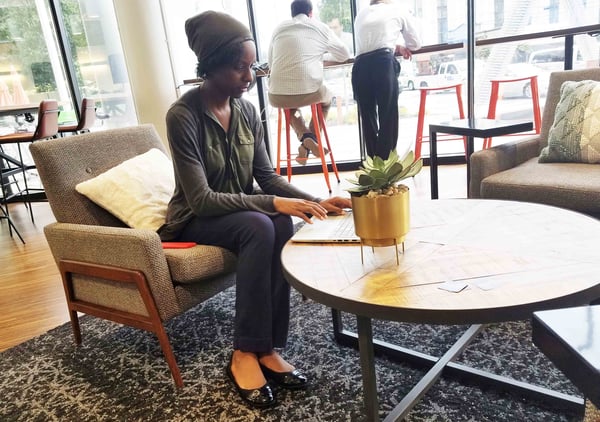 What surprised you about the startup community and working in the Atlanta Tech Village?

What surprised me is how easy it is to talk to different people. When we needed help there was someone in the office saying, “Come upstairs and we’ll spend an hour talking about it." That’s not something you can just do out of nowhere at other places. I thought that was really cool. And the community that’s nurtured here — like Friday Chowdown, where you can talk to different people in [the Atlanta Tech Village] and see what’s happening and what’s going on. There’s a constant feeling of always networking, always learning and doing more and always building a community with startups.

What does entrepreneurship mean to you?

Entrepreneurship, the word itself, means taking ideas and concepts and putting them into action. Another way to spin that is by saying: What can we do to improve on the things that are either currently happening or haven’t happened yet? With Steppingblocks, Carlo created this company, because he saw this need that college students were having, and at the time there wasn’t anything addressing the central question students had: What is it that I need to be competitive for the jobs I want to have in the future? And Carlo said, “I know what my consumer base needs, and so I’m going to do what I can to make that exist if it doesn’t already."

It comes with a lot of questions and testing and a lot of mistakes along the way … but that’s the fun part of being an entrepreneur. Mistakes are expected, and they’re accepted. So you take them. You learn what you can. And they help you create a better product.

You mentioned wanting to become a founder one day. Is there a problem you want to solve?

For me, I talk to my friends (my friends who are still in high school), and a lot of it is about the finance side of college: How is it that I even pay for college? What is it that I do when I take out loans? How do I finance myself after I graduate from college? All those questions that are big and broad and not easy to explain to 18- to 21-year olds.

In the future I would want to, say, build an app that was all about the personal finances behind college. Understanding budgeting when you’re in the dorms, so you don’t have to subsist only on Ramen noodles. Understanding what it is you need to do when you have a paid job to put enough money aside to start saving, because in the future, hopefully, you’re going to want to save for a house, or your first apartment or even save for, you know, the rest of your life. Especially as an econ major, I learned about how important it is to start that stuff early, and how, unfortunately, a lot of people don’t.

What’s the scariest thing about presenting your own ideas to a room of people, and getting them to believe in you?

I think the scariest thing for me is not just explaining my idea, but showing how my idea has merit or profit. Because when you start up a business, you’re going to want to have more experienced people behind you that can back you up and give you that financial or professional development support you need. And so before that can even happen, you have to have that conversation to convince them that what you’re thinking of is going to be a good investment for them.

Georgia State University has obviously played a big part in your personal and professional development. What stands out the most?

Every single year I’m more and more surprised how much support is available out there for me with Georgia State. No matter where you go there’s an office for what you need, there’s a person to talk to about whatever your concern is, there’s a program for whatever sort of interest you have and there’s always someone willing to talk to you. That has been integral to everything that I’ve done thus far.

When have you gone against the flow, here or outside of your internship, to achieve a goal?

I got that sort of push-back actually from my dad when it came to my major. I’ve been an econ major since my freshman year, and that’s really not changed. He wanted me to go into a STEM field, somewhere that had hard coding and technical skills to come out with. I definitely don’t blame him, because there’s a lot of security behind that. But when I came out of high school, I really cared about the economy and how people were doing from a financial standpoint, because when people’s finances aren’t together they can’t really get anything else in their lives together.

He definitely had a lot of worries and concerns. And during my time in college and with the different things that I’ve been doing, like Steppingblocks, my dad’s gotten really laid back and relaxed. Now he’s like, “Well, I’m certain that whatever she ends up wanting to do in the future, she’ll figure out a way.”

Talk some about the research project you’re doing with Georgia State.

During the summer, outside of my time with Steppingblocks, I’ve been helping one of the professors at Georgia State University, Dr. Eric Wright, with his research related to homeless youth in Atlanta ... going out to different spots across [the city] trying to look and find any areas where homeless youth might specifically go. Normally those are going to be areas where there might be services available nearby: soup kitchens if any, nearby churches that might offer any services or a couple of other locations where they might be able to sleep, as well as libraries or parks and motels and hotels.

When we know where they are we can start asking the questions: What is it they need? How do they sustain themselves? Where do they get their income if any?

How can we find them and help them where they are, so that they don’t have to hurt themselves or end up in unfortunate circumstances to get by?

I am passionate about that, because people don’t recognize a lot of homeless youth are college students; and you just don’t notice it, because they continue couch surfing or sleeping in their cars or even sleeping on the streets if that’s the only option available to them.

It’s not a direct relationship to what Steppingblocks does, but I do feel it’s one of those things where people are concerned about what they’re going to do in life ... especially college students who aren’t sure about how to be competitive in the job market and don’t know enough about how to manage their own money to be able to not end up destitute.

What advice can you give other students seeking internships at startups?

My biggest advice would be to keep your mind open and to be as proactive as you can. With Steppingblocks, the work that I’ve done now may not necessarily be a one-to-one connection with my major, but that doesn’t mean my work wasn’t important or that I didn’t learn. I learned a lot, and I really did have to step out of my comfort zone.

What is the best advice you’ve been given?

The consistent advice that I always get is: Don’t short yourself. Don’t just assume that you might not be a good fit for something. Just go out and try. It kind of works in the same way as the whole "be proactive" thing. As proactive as I am for a lot of different things, I always worry to myself: Am I actually the right person for this? Are they actually going to pick me? I feel like I’m not the best fit. And sometimes that really does hold me back from doing certain things. But every time I bring up that concern with people they tell me, “No, don’t think about what other people are doing around you. Don’t think about whether or not you fit ... you deserve to be here."

That’s another thing I love about the startup space. No one expects you to be an expert. No one has these super high expectations that you have to be a PhD to be able to do this (those do help). If you have grit, if you have the determination, if you have the optimism to want it, that’s what pushes you forward.

This semester, specifically, is very research heavy for me ... hopefully I can start developing the skills that I need to become a consultant after graduation. But really … a lot of the research ideas I have are tied back to these central themes I’ve been thinking about. I want to do more research based on government programs and how effective they are for solving different issues.

One of the topics I’ll be researching is income redistribution. Another one, I believe, is going to be related to education. There are some groups out there that feel like public education is a detriment and that privates and charters and homeschools are the way to go ... so that’s another topic I’ll be looking into. Whether or not that argument really makes sense, and if that argument was ever implemented would that not inherently disadvantage some groups of people?

You wear different hats, you learn different types of skills while on the job, and it teaches you everything you need to not only start your own business in the future, but to understand how businesses work; so if you do decide to go corporate, you have what it takes to tell your manager or your boss: What if we did something different instead? Because for a lot of businesses, innovation really is the future.